Do you need to loop a video on your iPad?  Maybe it’s a video you’ll be showing at a table during an upcoming conference or trade show. Maybe it’s at a Club Fair at high school or college, maybe it’s a looping video you want on display in your boutique.

Whatever the reason – there is presently no easy way I found built into the iPad that allows you to loop a video – to have it play over and over, without you hitting the play button again and again.  So, after some research I came across some apps that allow this capability.

The one I chose and installed is called Loopideo, by Xorbix Technologies.  Loopideo allows video looping for iPhones, iPods, & iPads as long as you are running iOS 6 or higher.

I installed the App, loaded a video from the iPad Photos Album (I had air dropped the video to the iPad previously), clicked to select the video and then clicked ‘Play” and it worked!

You can also import from DropBox if you have that app on your iPad.  They also have a Paid app called Loopideo Pro but honestly I could not see what different optio 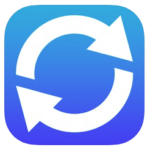 You’ll find this app in the Apple App Store via this link:

Share | Tweet | Share | print | email
Categories: Mobile devices, Tech at Work, Tech for Experts & Authors
This post or page may contain affiliate links, meaning I may earn a commission off of any item purchased.